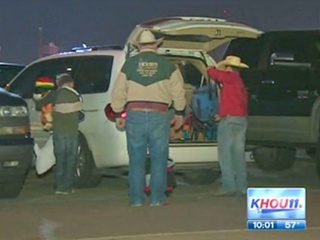 Houston police are asking rodeo-goes to keep an eye on their valuables after three thieves were caught in a Reliant parking lot. Photo courtesy of KHOU Houston/Channel 11

A sharp-eyed witness put a damper on some petty crime when a trio of suspected gang members were spotted breaking into cars at RodeoHouston.

The three men managed to acquire a hefty stash of loot from vehicles parked in the Maroon Lot at Reliant Park, taking everything from stereo equipment and prescription drugs to cellphones and golf clubs.

According to court records filed through Harris County, they even scored a handgun and a box of ammunition that one rodeo-goer had hidden in the car.

The group was apprehended several gates away after an eyewitness contacted the Houston Police Department. Each suspect remains in jail on theft charges.

KHOU Ch. 11 reports that the men are members of the Fifth Ward Circle, a Houston-area street gang known for its black and red colors. The group also appears to record its own music, some of which is posted on MySpace.