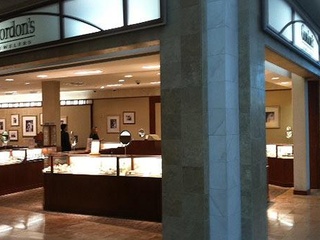 Gordon's Jewelers in First Colony Mall is the most recent victim of smash-and-grab. Photo via KTRK

Another week, another story of a brazen smash-and-grab jewelry store heist.

Gordon's Jewelers at First Colony Mall in Sugar Land suffered the most recent attack, as KTRK Ch. 13 first reported. A surveillance video from Feb. 22 shows four masked men storming the store, smashing display cases, stealing merchandise and running from the scene in less than a minute. Eyewitnesses say that the suspects got away in a dark blue or green Toyota Tercel.

This is just one in an outbreak of other robberies over the past several months: A $355,000 heist at Ben Bridge Jewelers at the Galleria, just days before Christmas; a swift, early afternoon sledgehammer attack on a Zales outlet in Harris County in late January; and rush hour assault on another Ben Bridge Jewelers at Memorial City Mall, where suspects absconded with $400,000 worth of watches — just to name a few.

In each case, the robbers have taken jewelry store by surprise during business hours, breaking the glass on display cases with hammers or other tools and escaping with wares in a matter of moments. No one has been harmed, and no arrests have been made.