The reviews are in
A rebuttal to the crazy art slashers: Three Houston concerts illustrate why it's essential for "old" folks too 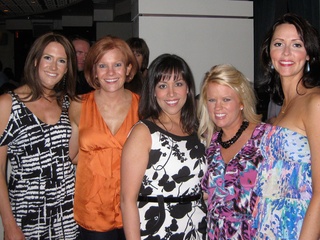 Houston Texans Owen Daniels stepped out of uniform Monday night and into dress shirt and slacks at Morton's The Steakhouse to host his second annual Celebrity Server Dinner benefiting the Owen Daniels Catch a Dream Foundation. A serious handful of Texans joined him in the fundraising effort.

This opportunity to rub elbows with and be served by the Houston Texans is fast becoming a hotter ticket than a 50-yard-line seat at Reliant Stadium. The event sold out 10 days before doors opened.

The Celebrity Servers at Morton's benefit evenings are in their ninth year nationwide with more than $2 million raised for various charities since inception.

The Twombly Gallery by candlelight

Scotty Arnoldy says it was one of the best surprises he has had in years — when a visit to the Trotter Family YMCA turned into a birthday salute. Scotty is an honorary co-chair of the $22 million capital campaign to build back the YMCA Camp Cullen after a fire destroyed it last year. The pretext of an "official photo" was the lure to the active businessman to the Trotter Y.

Lucky Beth Bryant — her girlfriends orchestrated a 28th birthday party for the bouncy blond at the new posh nightspot Saint Genevieve in West Ave. Beth's gal pals and their guys celebrated with specialty bites and cocktails from the sophisticated watering hole's happy hour menu, including the drink of the hour created in honor of the birthday girl — The Beth, a potent combo of Tito's vodka, peach schnapps and orange juice with a mint leaf.

Beth's girlfriends Maidie Ryan, Abby Lestin and Lisa Gochman organized the bash along with Saint Genevieve owner Darren Van Delden, who made sure that the partygoers got a chance to sample old-fashioned s'mores before leaving.

Saint Genevieve was particularly lovely on this night thanks to the floral centerpieces sent over by Beth's friend Miriam Habib of Lexis Florist.

For those of you who just can't get enough of H-Town's most fashionable grande dame, the October issue of Harper's Bazaar singles out Lynn Wyatt in its "Fabulous & Very Classy at Every Age" feature. In the company of supermodel Claudia Schiffer and writer/editor/photographer Lisa Eisner and a few others, Lynn represents women 60 and over.

She tells the magazine that the hallmark of modern elegance is "Actually living a life that can adapt to any situation with style, poise and grace."