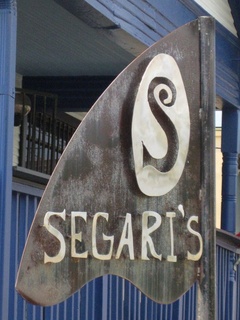 Sam Segari was a big guy. When we say big, we mean it in every sense of the word. He towered over most people. He had a larger-than-life presence. You know when Sam was in the room. His voice, well, it boomed like a state-of-the-art sound system. And his customers loved him, so much so that they remain loyal years after his death.

His daughter, you see, runs the place much like Sam did, using top-notch beef for the ever-popular grilled steaks. The seafood gumbo recipe remains the same. It still doesn’t come with rice, and while Sam was alive, we never, ever dare asked. Sam was pretty particular about his food. But he made up for it by being generous. His fried shrimp spilled off the plate, plumb and encased in a faultless golden-brown batter. His juicy rack of lamb was enough for two. You rarely went wrong with anything on Segari’s menu. The same is true today because only a handful of dishes are served. This makes it easy for the waiters because there’s no menu. They have to recite the menu over and over again. Sam liked to talk, you see, and people liked to listen to Sam. There’s one thing different about Segari’s these days. There’s a sign outside. While Sam was alive, countless Houstonians would drive by his place and never knew it was a restaurant. He didn’t bother advertising, but his customers – from Bob and Elyse Lanier to other notables – knew where to find Segari’s. They would pull up in their limos. And Sam would treat them just like everybody else. It didn’t matter if you had $10 or $10 million. He only believed in two things – his daughter and good food.


It’s not advertised, but Segari’s makes a fabulous burger. The meat tastes like good beef, not the processed mealy burger we encounter more than we would like.