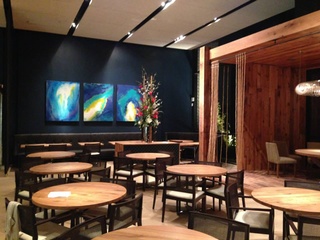 Fish and the Knife is a Japanese-inspired restaurant  on Westheimer just west of Hillcroft. While the location seems like an unlikely one for a high-profile, high-dollar sushi restaurant and nightclub, that hasn't dissuaded diners and club goers alike from checking out the high-style interior. The restaurant feels huge, because it is: 13,000 square-feet, with a 4,000 square-foot kitchen and 4,000 square-foot lounge. All told, the restaurant can seat 350 people. Turning to the food, the menu is divided into two sections. The raw side of the menu is divided into appetizers, conventional rolls and special rolls. Iron Chef America contestant Bob Iacovone directs the grill side. He's returned to the kitchen after taking a four-year hiatus to start his family.The menu reflects his Louisiana influences with dishes that include chicken and andouille pot pie, barbecue shrimp and duck confit alongside more traditional, Asian-influenced fare like shrimp tempura and pork spare ribs.