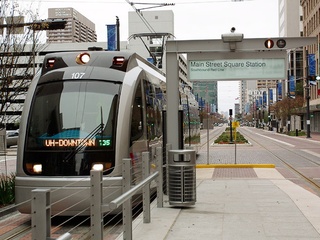 Step off the train and into the urban realm. Though only seven miles long, METRORail connects the core of Houston culture.

There is no "square" at Main St. Square, but this is the most oft-used station for downtown destinations. Corporate types, theatre fanatics, bar flies and everything in between rush on and off the platform 24/7. The reigning queen of the square is the landmark Macy's, originally the downtown Foley's department store. With the station's glistening fountains and Macy's glam window displays, it's hard not to feel like you've reached the heart of the city.