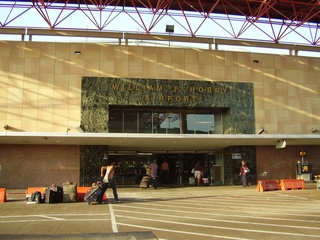 In many ways Hobby is the also-ran airport after much-larger Bush Intercontinental on the north side of town. But Hobby boasts a vaunted history, in operation since 1927, and was briefly named after Howard Hughes for his contributions in the 1930s.

Though small (only four runways), Hobby is spacious and newly renovated and has been ranked among the top airports for customer satisfaction. Southwest Airlines has a hub here and operates 80 percent of the flights, with other budget and traditional airlines including JetBlue, American, Delta and AirTran maintaining a smaller presence.

Hobby has an array of restaurants in the central concourse including Pappasito's Catina, Pappadeaux Seafood Kitchen, and Hunan Return of the Phoenix.