One of Houston's top chefs hurt in a serious bike accident: Fans of his cooking offer support

The culinary genius behind Hugo's and Backstreet Cafe took a serious spill while riding his bike at Terry Hershey Park. Chef Hugo Ortega broke two ribs and his clavicle (collarbone) and had surgery on Friday.

Ortega is no stranger to cycling having rode in multiple MS 150 events. Ortega owns both a mountain bike and a road bike.

A native of Mexico City, Ortega is the oldest of eight siblings and that big family is stepping in during his recovery. His pastry chef brother Ruben Ortega will watch over everything at the restaurants while Hugo is in recovery. Once Hugo feels better, he will be back in the kitchen doing what he loves.

"His pain level was very high during the first couple of days after his surgery."

"His pain level was very high during the first couple of days after his surgery," his sister Sandra Ortega tells CultureMap. "I saw him over the weekend and he is doing a lot better. He is able to walk and can get around now."

A Umami dinner scheduled for Sunday was postponed — and will be rescheduled when Hugo Ortega is well enough. Ortega and Kata Robata chef Manabu "Hori" Horiuchi were set to join forces in the much-anticipated, sold-out dinner.

The bike accident comes at a busy time for Ortega. The chef is working to get his 8,000-square-foot Mexican seafood restaurant called Caracol open and running in the new BBVA Compass Plaza by September. He's also promoting his own cookbook featuring recipes from the streets of his homeland in Mexico.

But by the look of Hugo's Facebook page, the chef's fans are willing to wait. Tons of posters are leaving their best wishes for the biking chef. 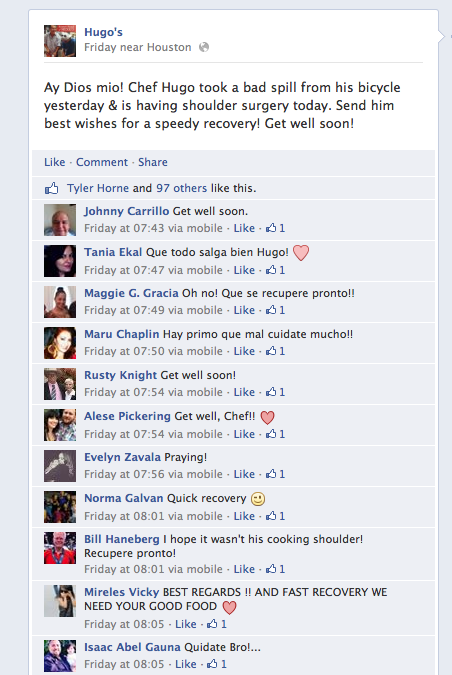 It appears that Champagne Papi has got Tina Snow and the rest of her Hotties all enraged.

Aubrey Graham, better known to y’all as Canadian hip-hop giant Drake, got Twitter buzzing when his latest album Her Loss, a collaborative joint he did with fellow rapper 21 Savage, hit streaming-music platforms late .

But what really has got social media going is a line in the song “Circo Loco,” which people are saying is aimed at Houston’s own Megan Thee Stallion, who was allegedly shot by ex-boyfriend Tory Lanez in 2020. (Lanez will be going to court soon regarding that.) On the song, Drake raps about a woman who "lie 'bout getting shots, but she still a stallion.”

Megan (along with her fans) went off regarding the lyrics on Twitter. “Stop using my shooting for clout b**** a** n—–!,” she tweeted. “Since when [the f***] is it cool to joke about abt women getting shot ! You n—– especially RAP N—– ARE LAME! Ready to boycott bout shoes and clothes but dog pile on a Black woman when she say one of y’all homeboys abused her.”

Drake may have dissed Megan on his latest release. Photo by Chinh Phan

She continued, “And when the [motherf***ng] facts come out remember all y’all hoe a** favorite rappers that stood behind a n—- that SHOT A FEMALE.”

Interestingly enough, the Queen of Hot Girl Summer (whose real name is Megan Pete) is listed as a songwriter on “Rich Flex,” another song on the album. 21 Savage references Megan’s hit “Savage” by rapping, “"I'm a savage/Smack her booty in Magic/I'll slap a p**** n**** with a ratchet."

Whether or not that “shots” line was a clear diss or Drake trying to make a booty joke that (pardon the pun) backfired, at least Megan has got a piece of the publishing on the album.

Mack will throw out the first pitch on Saturday.

UPDATE: Minutes after this story originally published, the Houston Astros announced that McIngvale will throw out the first pitch on Game 6 of the World Series.

Ever since Jim "Mattress Mack" McIngvale blasted a smack-talking Philadelphia Phillies fan with a profanity-littered comeback on Tuesday, November 1 after Game 3 of the World Series, fans across Houston have rallied to his defense if his beloved Houston Astros.

That zealous support has sparked a petition on popular social justice platform Change.org. User Dean Lankford created the call to action, titled "Have Mattress Mack throw out the first pitch at Game 6 World Series," on Thursday, November 3. Since then, more than 102,000 have signed, with a goal of 150,000.

"Send this to everyone, and maybe the people that can make it happen will make it happen," Lankford writes. "With how divided we can be at times...this is a great way to come together and realize that we have so much more in common!"

Representatives for the Astros, when contacted, remind us that the decision involves more than just the team and includes input from Major League Baseball.

All this stems from a heated moment after World Series Game 3, where the Phillies trounced the Astros 7-0. As he told CultureMap, a drunk fan accosted McIngvale with "cheater" taunts. But it wasn't until the fan name checked José Altuve that Mack erupted.

“Then it was, ‘José Altuve will never make the Hall of Fame — he’s the biggest f*cking cheater ever.' I had enough of him,” Mack told us.

The city responded with a surge of support, offers to provide free security, and a host of "Gangsta Mack" memes, including a popular one that references his Gallery Furniture location.

This Gangsta Mack meme is everything. Know Your Meme

We couldn't reach Mack by phone as of publication time, but the benefactor/marketing guru/gangsta offered a sincere thank you to fans for their support — and even to the City of Brotherly Love for his time there.

Will he toss the ceremonial first Game 6 pitch on Saturday, November 5 at Minute Maid Park? We'll see, but clearly, Mack has earned some mad street cred. Here's hoping for a collab between Mack and our rap icon Bun B.

This headline has been adjusted to reflect breaking news.

Houston fans of alterna-emo-pop group Paramore and their radio-ready hooks can catch the trio next year during a just-announced stadium tour.

The act famous for anthemic singles such as "Ain't It Fun," "Misery Business," and "Still Into You" will hit Toyota Center on July 11, 2023, with Foals and The Linda Lindas as openers.

Tickets go on sale to the general public at 10 am Friday, November 11 at ToyotaCenter.com. To protect tickets from mass-purchasing scalpers, the tour is partnering with Ticketmaster’s Verified Fan platform on two presales; those interested can register for both presales here now through Monday, November 7 at 10:59 pm.

In addition to Houston, Paramore will play Dickies Fort Worth's Dickies Arena on July 8 and Austin's Moody Center the next day on July 9.

Paramore is touring in support of their sixth studio album, This Is Why, which is slated for a February 10, 2023 release. The band recently performed the title track on The Tonight Show Starring Jimmy Fallon and also recently performed at Austin City Limits.

Formed in 2004 in Franklin, Tennessee, Paramore has seen myriad lineup changes, but has been consistently led by charismatic lead singer Hayley Williams, known for her hair of varied hues and springy stage presence. The band boasts more than 17 million followers on Spotify with more than 500 million streams on songs "Still Into You" and "Misery Business."

Active in socio-political issues, Paramore is donating portion of ticket sales to Support + Feed, which supports plant-based food initiatives and food equality and REVERB, an environmental nonprofit. REVERB will also host an "eco-village" at each tour stop to raise awareness for social and environmental causes.