Teen Mom-turned-porn-star is now Austin stripper — it's for research! 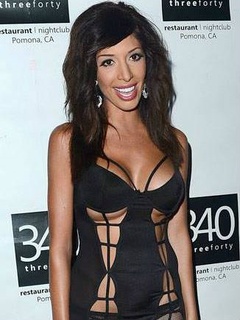 Abraham, who is best known for being a teen mom in MTV's aptly named reality show Teen Mom has also starred in the adult film Farrah Superstar: Backdoor Teen Mom.

After Teen Mom, Abraham went on a weird fame spiral, appearing in tabloid magazines and tipping off the paparazzi so they could catch her jogging. She also went to rehab but was kicked out and lived in Miami, then she left. She wrote a book in there somewhere and made an album that one critic said "is so far removed from any conceptions of 'goodness' that goodness itself stops being a measure to judge it by." She's just a typical celebrity wannabe living in the reality television age.

The Nebraska-born Abraham has now landed in Austin where she is a stripper at Palazio Gentlemen's Club (501 E. Ben White Blvd.). In an interview with E! News, Abraham gives the following response when asked about her new gig. (Insider tip: Read the whole response aloud, preferably while a friend is listening.)

I'm doing research. A friend of mine works there and I'm researching. I've been trying out all the roles that make up a gentleman's club, including cocktailing and dancing. There's management and there's cooking, too. It's job shadowing that I hope pays off. In the same way Jennifer Aniston researched her role as a stripper, that's what I'm doing. It's how I get the information to write my books and do my movies. Unfortunately, I'm not free to talk about what those future projects may be. But I'm interested in hearing all the women's stories. And while I'm doing it, I'm getting paid. I'm getting paid to play a role and get informed.

According to E! News, Abraham was hired at the South Austin gentlemen's club a few weeks ago and wears a costume consisting only of a bejeweled bra and a nude thong.