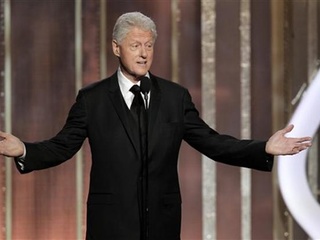 Even without the trademark snark of Rick Gervais – and even with the multiple repeats of that obnoxious Diet Pepsi commercial with Sofia Vergara – Sunday evening’s telecast of the 70th annual Golden Globe Awards was mostly funny and frolicsome. Among the highlights:

As early as their opening monologue – or would that be dialogue? – Tina Fey and Amy Poehler proved they had been exceptionally well-cast as co-hosts.

Their tweakings of Hollywood notables came off as breezily irreverent without being truly nasty, even when Poehler said of Zero Dark Thirty director Kathyrn Bigelow: “When it comes to torture, I trust the lady who spent three years married to James Cameron.”

And, yes, even when Fey quipped: “Quentin Tarantino is here tonight – the star of all my sexual nightmares.”

The running sight gag of Fey as a mustachioed multiple nominee got stale quickly, and was wisely discarded early in the evening.

But the only really annoying thing about their joint appearance was their extended absences from the stage. In fact, there were times when I felt I was seeing more of Sofia Vergara throughout the evening.

There were several worthy possibilities, ranging from Anne Hathaway’s embrace of the Globe as a defensive weapon (“Thanks you for this lovely blunt object, which I will forever use as a weapon against self-doubt!”) to Quentin Tarantino frankly flabbergasted response to receiving the Best Screenplay award for Django Unchained.

And Best Supporting Actor winner Christoph Waltz earns at least a hat-tip – or a bow from his Django Unchained horse – for the way he stressed every syllable of “accolade.”

But the grand prize goes to Jennifer Lawrence (Silver Linings Playbook), for expressing her uninhibited enthusiasm – “I beat Meryl!” – and for confirming our worst suspicions about Harvey Weinstein’s awards campaign tactics: “Thank you for killing whoever you had to kill to get me up here today.”

Several judgmental types in the Twitter universe complained Sunday evening that Jodie Foster failed to rise to the occasion as a gay role model by flat-out coming out during her eloquent acceptance speech for the Cecil B. DeMille Award honoring her multi-year career.

I have to ask myself: What program were these people watching? Did they not hear her giving the shout-out to former partner Cydney Bernard? Were they not paying attention when she casually noted that, “about a thousand years ago,” she’d revealed her sexual orientation to close friends and collaborators?

Didn’t get the joke about her not feeling the need to hold a press conference to spill the beans about her private life, and then follow that with her very own reality TV show? In short: What more do these people want?

(Trivia note: At 50, Jodie Foster is the youngest winner of the Cecil B. DeMille award since —cowabunga! —Charlton Heston, who was all of 43 when he received the honor back in 1967. He didn't feel the need to discuss his sex life on stage, either. Or even address the alleged gay subtext of Ben-Hur.)

On the other hand, I had to laugh out loud at the sly way Foster teased us early in her speech, at first appearing to promise a tell-all announcement – and then rapping our knuckles for being silly enough to believe she’d ever end her tradition of shielding her personal life from our prying eye.

During the film-clip montage the Globe people prepared in her honor, there was an especially appropriate snippet from Carny, in which Foster’s character brazenly flaunted her sexiness while more or less seducing two women into playing an obviously crooked game at her carnival both. Then as now, she could say: “Gotcha!”

President Bill Clinton, introducing Best Picture – Drama nominee Lincoln. No one else came close. (Though, to be fair, Will Ferrell and Kristen Wiig deserve some sort of honorable mention.)

And few other folks received as lengthy a standing ovation.

Not incidentally, the former POTUS aptly described Steven Spielberg’s historical drama as an inside look at the struggle to pass important legislation, a process that necessitated “a lot of unsavory deals that had nothing to do with the big issue.”

Of course, Clinton added with a wink-wink, nudge-nudge grin, “I wouldn’t know anything about that.”

Is Bill Murray getting ready to star in The Yosemite Sam Story, or what?

Was Tommy Lee Jones disappointed because he lost the Supporting Actor award, or was the Lincoln nominee just plain pissed off because he had to be at the Golden Globes in the first place?

I was one of the first critics to review (very favorably) Lena Dunham’s breakthrough film, Tiny Furniture. And I showcased her in a CultureMap interview long before she got Girls going on HBO and won two Golden Globes.

So just remember, young lady: You owe me. Big time.

BUT WHAT DOES IT ALL MEAN?

Oscar handicappers who look to the Golden Globes for portents of Academy Award victories likely were frustrated by Ben Affleck’s Best Director win for Argo, since Academy members last week failed to nominate the popular actor-auteur for one of their own glittering prizes.

Especially since Les Miserables (which copped top honors in the Best Picture – Comedy or Musical category) is widely considered to be running out of steam as a serious Oscar contender. Of course, if Hugh Jackman and Anne Hathaway launch a new publicity campaign by teaming up to do a Diet Pepsi commercial…

See Tina and Amy's opening monologue at the Golden Globes: