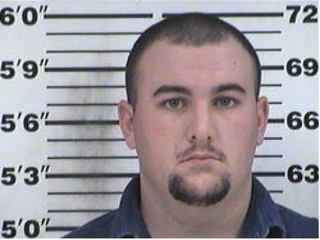 Timothy Conatser, a former volunteer firefighter for Royse City in North Texas, was arrested on two counts of felony animal cruelty after bragging on Facebook that he'd shot two dogs. Conatser, 20, turned himself in to the Hunt County jail on Wednesday.

Conatser is alleged to have shot his neighbor's two dogs for crossing onto his property. He posted photos of the dead dogs, with a caption that read, "Somebody didn't put any truth to my warning. Keep your [dang] dogs on your property."

The firefighter claimed the dogs attacked livestock in his barn. Conatser was a volunteer firefighter with the Union Valley Fire Department, who suspended him from the force after the incident became public. He's since been removed from their roster.

"This man will have to prove the dogs posed a threat to him or his other animals on the property."

Jill Sulak, a North Texas animal advocate, said that the case would be interesting to watch because Conatser lives outside the city limits.

"The offense did not occur within the jurisdiction of Royse City, and what makes that important is that Hunt County does not have any ordinance requiring pets be confined to own property," Sulak says.

"To avoid animal cruelty charges, this man will have to prove the dogs posed a threat to him or his other animals on the property."

The charges are state felonies, with a maximum sentence of from 180 days to two years in a state jail and a fine of up to $10,000.